Home Home Inside the Home of Art Collector Henry Miller 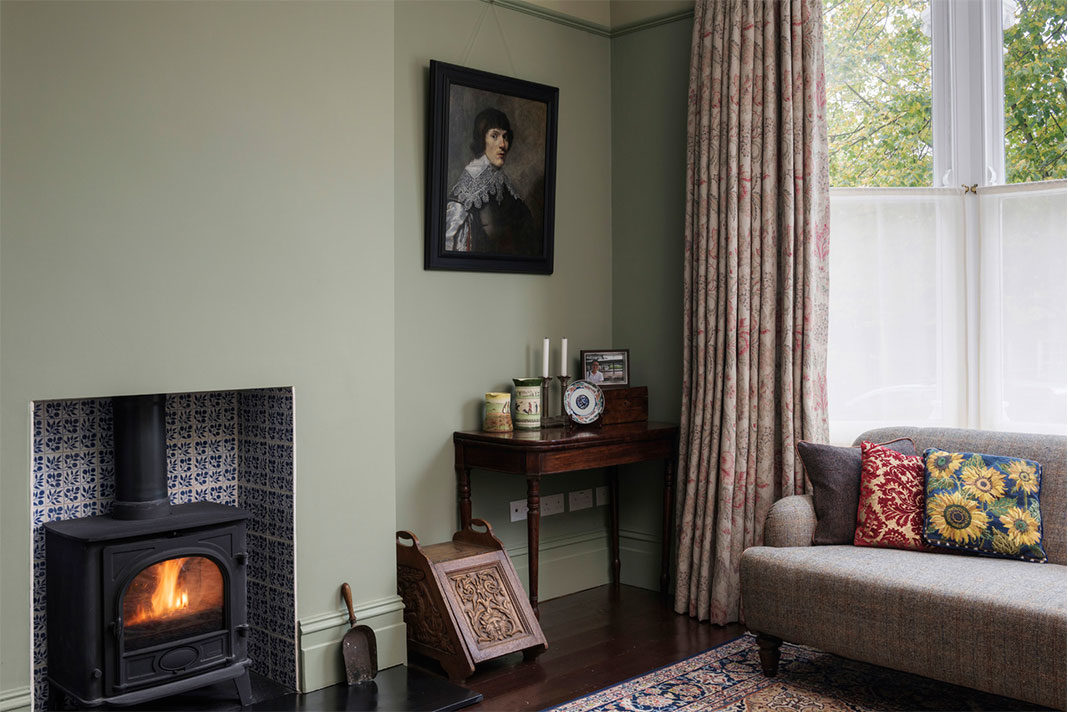 Lawyer, collector, and art dealer Henry Miller’s lovingly restored Victorian home is a charming backdrop for his assemblage of figurative art. We discovered the inspiration behind both interiors and collection.

Collectors always give the same answer when you ask them at what point they began buying art. “In my teens” they’ll say. Those formative years kindle so many interests that become lifelong passions. Hearing people like Henry Miller admit he bought his first pieces before hitting twenty assuages the guilt I felt at university after having spent half my first student loan instalment on a Sir Terry Frost print. The collecting bug bites young, and paves the way for a lifetime of gratifying reward.

Miller’s collection is an interesting one. Unlike most collectors who pick a period, school, location, or style to focus on, Miller instead chose a subject matter. The male form. The resultant group of work is eclectic and delightfully curated; unbound by ultra-specific requirements, the collection spans hundreds of years of time and countless movements. It features painting, photography, drawing, and printmaking, brought together under one central theme. Works by Augustus John, Noel Coward, Duncan Grant, Jean Cocteau, Yves Paradis, and countless others adorn the walls. A visual guide to gentlemen throughout the ages and their myriad of differing depictions.

The house was bought with a total refurbishment in mind. Previously owned by hoarders the building was crying out for a gentle and creative touch to bring it back to its former glory. More than just a place to live, Miller is basing his newly established gallery – Henry Miller Fine Art – within his home. Décor of course had to be top notch.

The restoration has been a sympathetic one; original period features are carefully retained but align with contemporary tastes. The sitting room is finished with dark wood floors and musty sage green paint on the walls. William Morris fabrics and Arts & Crafts movement furniture are placed as smartly as possible, in proper keeping with the era of the house.

The unexpectedly bold royal blue dining room is a real talking point and gives the property vivacity. An elegant round table anchors the room – a treasured heirloom bought by Miller’s newlywed parents, around it sit mid-century chairs with painted metal frames. Scattered throughout the house is an enviable collection of cabinetry; both Victorian Chinoiserie alongside other European and Asian styles.

This house is testament to the capabilities of from-scratch collectors. The art is deeply personal, reflecting how invested Henry Miller is in his collection. We asked him about the journey art has taken him on, and the history of his home.

Tell us about the origins of your interest in collecting art, and where that eventually lead.

I started collecting art in my teens, and still have the first piece that I bought (an Andy Warhol poster for the film Querelle). Growing up, I was pretty wild, and therefore interested in where art met counter culture. Watching films like Derek Jarman’s Jubilee and Caravaggio and reading about Andy Warhol’s factory established an ongoing awareness.  I went to university to study law but continued to buy art I liked.

The real purchasing started in my thirties, mainly at auction. I now often buy from Europe; I love going for shopping trips to buy art in Paris. There are so many wonderful places to explore. My interest in art evolved to such an extent that I took a break from 70 hour weeks and being a lawyer in order to gain a masters in History of Art at Christies Education.

The theme of your collection is the male form, tell us what inspired that?

Focusing on the male form stemmed from my love of figurative art. When you look at pictures of people, you are in effect looking at yourself. The clothes and haircut may differ, but the human form is the one subject in art that has not changed over hundreds of years; only artist’s methods for depicting it. Also, focussing thematically like I do enables me to curate a collection which spans the centuries. Most dealers focus on a particular time period, for instance 17th century Dutch or modern British and Irish. I don’t think this reflects how people collect and live with art. People are far more eclectic in their tastes.

You’ve recently set up an art business (Henry Miller Fine Art) which you’ve decided to base in your home. Tell us how integrating business and home has worked.

Placing the gallery in my home was an accident really. It was always going to be a perfect place to hang a large collection of pictures, but at that time I did not expect to turn it into a gallery. Displaying the pictures in the house enables me to show them in a domestic setting very unlike any gallery space I know, which gives people an idea of what they would look like in their own home. It hopefully gives people an opportunity to connect with a piece.

We bought the house as an uninhabitable wreck in 2012, but all the original features were still there so we were able to restore it back to its former glory. My taste in interiors and particularly in this house is very sympathetic to the Victorian aesthetic but with a modern twist. I have a lot of Victorian antiques but also many pieces from Asia – mainly China and Tibet, but also a little Korean, Thai, and Burmese. If you look at the Victorian aesthetic movement from the 1880s for example, there was a heavy influence from the opening up of the ‘East’ in the mid to late 19th century, giving birth to Chinoiserie etc.

Are there any favourite paintings or works that hold special significance to you?

There are several pieces I am ever fascinated by. The Duet by Noel Coward is one. As a man who lived his life in the public eye and mixed with royalty and Hollywood, Coward’s love of painting was one of the very few areas that he kept private. Painting was for his own enjoyment and he never sold his works. When I saw it for the first time, the painting leapt out at me before I knew it was by Coward. I thought it was a strikingly modern picture, beautiful in its simplicity.

I also like this Edgar Holloway. Not only is it beautiful and expertly executed, it is a self-portrait, which I have a particular interest in. For a portrait to be really successful it must convey the character of the sitter, and to do that an artist must forge a personal connection. That’s why I think so many self-portraits are so successful.

What is next for you and Henry Miller Fine Art?

I shall be having a small private exhibition of pictures in my gallery space in early December, as well as further exhibitions next year both in my home and in a gallery in central London. This will include a discrete show of engraving by the British artist, Francis West, who died in December 2015.