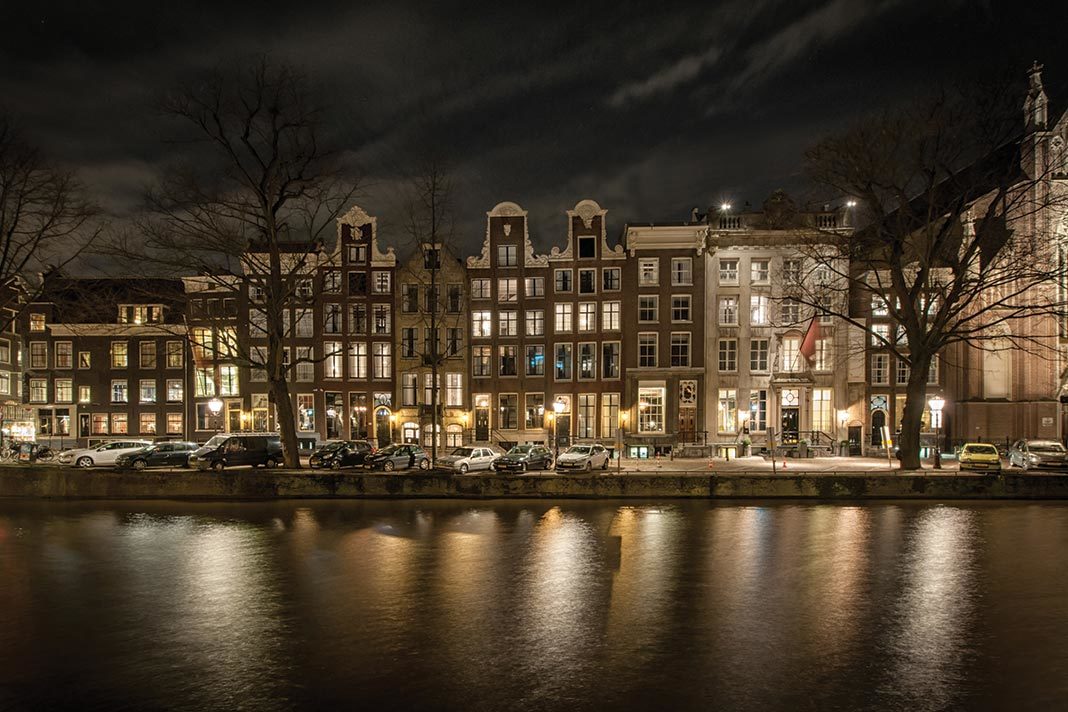 We discover the winding streets and infinite charm of Amsterdam, with a stay in the quintessentially Dutch and elegant Pulitzer Hotel

No one could be bored in Amsterdam and like many before me, I’d visited on numerous occasions as a student. After all, cheap and quick flights coupled with affordable hostels make it an attractive weekend away regardless of your budget. Now that my student days are behind me, it was time to revisit the city as a fully-fledged ‘adult’, replacing the cheap flights and hostels with a mini-road trip across northern Europe and a stylish stay in the form of the Pulitzer Hotel.

After a few hours cruising through the Dutch farmland and sea defences, we arrived at our destination, where we found the Pulitzer straddled by the Prinsengracht canal on one side and Keizersgracht canal on the other, making the hotel perfectly positioned within the city’s most fashionable Negen Straatjes (Nine Streets) quarter, home to charming cafes, chic boutiques and some of the best restaurants in town. Also home to the one and only car stacker (Pulitzer’s own) in Amsterdam, it made short work of parking in a notoriously non car-friendly city.

The hotel itself has experienced a mass renovation after fully reopening in 2016. Established by Peter Pulitzer, who in 1960 saw great potential in the beautiful townhouses of Amsterdam, he purchased twelve of them and began the creation of the city’s first five-star hotel – an accolade that in itself makes the Pulitzer worth visiting. Now privately owned (but not by a Pulitzer), it has grown to occupy twenty-five beautiful town houses, with renovations being directed by designer Jacu Strauss, who has retained the hotels’ understated charm and true Dutch character.

We opted for an elegant and spacious ‘Generous Room’, which was great value. If we were blowing the budget we’d have gone for one of the four Collector Suites that have been uniquely crafted and accessorised with artefacts associated with various collectors. All rooms are well furnished, comfortable and follow a familiar theme within the rest of the hotel. Think exposed warm wooden beams, shades of blue and purple and statement yellow furniture. Having dispensed with our four wheels, we arranged to borrow two from the hotel and took a late afternoon cycle around, window-shopping along the way. After working up an appetite, we made our way back to the hotel and as we turned the final corner, were greeted by a third frontage to the Pulitzer, the one which holds their own restaurant, Jansz.

Serving beautifully crafted modern classics, you can dine on diver scallops and a rich pea purée, followed by lobster risotto served with a wafer of dried squid ink, both of which I highly recommend. Throughout dinner I found myself gazing into the distance and savouring every mouthful, or as the Dutch say; “Alsof er een engeltje over je tong piest”.

After waking from a refreshing sleep in our king-sized bed, I had a moment to take in the little details that make up our room. I notice the headboard of the bed has been shaped to echo the iconic rooflines of the townhouses in Amsterdam and the mini port-hole and timber weatherboard of the dividing wall are reminiscent of the houseboats that line up outside. It’s the little details that make it such a special place to stay.

A morning coffee can be freshly brewed while you wash, thanks to the provision of the locally roasted Stooker coffee next to the minibar and television stand that has been specifically designed by Strauss for the renovation. The icing (or biscuit) on the cake is the complimentary Stroopwafels in the room, which are fully replenished every morning.

After spending the day at two of my favourite places in Amsterdam; Artis – the city’s zoo and Hortus – the botanical gardens, we returned to the hotel for a well-deserved drink at The Pause, where one can also grab some lunch or breakfast within its courtyard. The garden that surrounds it offers a moment of peace amongst the flowers or the opportunity to swing on suspended chairs.

As the evening air cooled, we headed inside to Pulitzer’s Bar, where the glasses weigh more than your shoes and the leather chairs feel like you’re being engulfed in a warm hug. We sat and enjoyed the cocktail of the month – the Paloma – a pleasant grapefruit and lime mixture, and as the evening drew in, time seemed to slow a bit as we sat in a cosy low-lit corner of the bar watching the boats chug up and down the canal.

The hotel and all of its 25 buildings have been beautifully stitched together, where you can find yourself in pockets of beautiful design; from the miniature greenhouse walkways that cut through small courtyards, to treading over the impressive symmetrical marble tiles leading to the Saxenburg Galleries. The restoration harmonises what is a complicated array of buildings, creating a collection of moments that culminate in a wonderful hotel. The renovation has truly re-cemented Pulitzer’s position as the go-to place, not only within Amsterdam’s hotel scene, but also as a local establishment, where a passer-by can walk in and catch a moment of peace and luxury before heading back out into the city’s characterful and energetic cityscape.

Prices from around £274 per room per night, pulitzeramsterdam.com