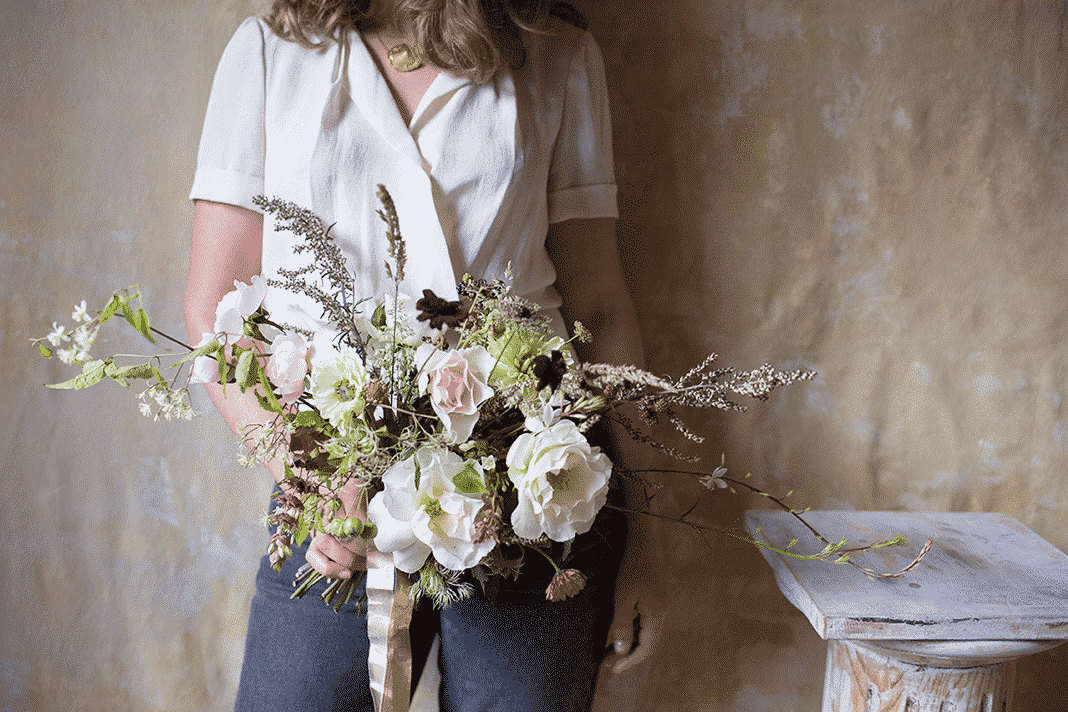 From a Victorian railway arch in Shepherd’s Bush, Aesme Flower Studio creates exquisite arrangements using British garden flowers grown on a farm in Hampshire. Alex Nutting tells Absolutely how she and her sister Jess swapped their office jobs for floristry thanks to a formative trip to New York

New York is much vaunted as a place that fosters dreams. Few, though, can have been launched into the world quite so fully formed as Alex Nutting’s, and after so brief a spell in that insomniac of a city – its famous sobriquet proving, for her at least, entirely apt. Restless from an uninspiring office job, in 2014 she boarded a plane on a whim to take up a fortnight’s internship at Saipua, a florist in Brooklyn that was busy shaking off all the prescribed rules of formal floristry. 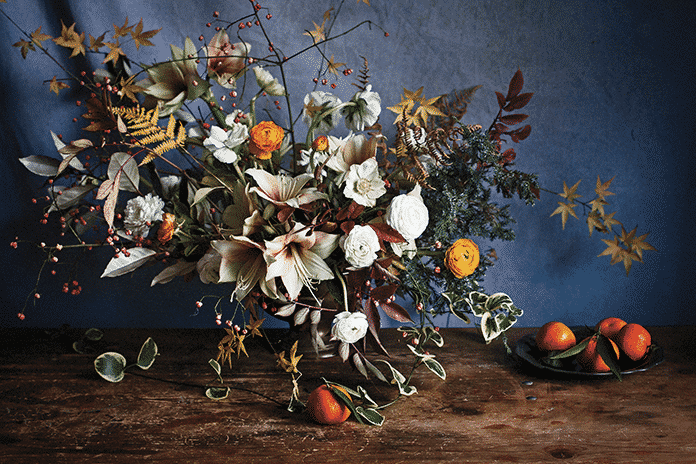 Four years later, she and her sister Jess have together taken up residence in an old railway arch in Shepherd’s Bush, scrubbed up after a decade’s dereliction, as the cavernous studio of their own florist, Aesme. It is where they prepare for their myriad glamorous events and perennial round of (always stylish, probably thanks to them) weddings; it is where they hold their beguilingly titled workshops, such as Fruitful August and French Rococco; and it’s where some 22,000 Instagram disciples follow their every cascading arrangement and perfect posy, doubtless sighing at the beauty, almost as a reflex. Aesme’s trajectory has been a rocketing success, but, as Alex explains, none of it has been the result of the meticulous planning one is always told is requisite for starting a business.

“When I went to New York, I’d been interested in flower arranging as a hobby, and in a naïve way, I probably thought, ‘oooh, maybe this is something I could do.’ So I did this training with Sarah Ryhanen who is the founder of Saipua, and it threw me into an amazing world. I’d only ever bought flowers in the traditional sense in shops – I had no idea there were studios doing these extraordinary things. Sarah has a farm west of Albany where all her flowers come from – it really opened my eyes to what things could be.”

Fired up from her Brooklyn sojourn, Alex and her sister Jess, who was similarly stuck in an unrewarding job, met for coffee. By the time they drained the contents of their cups, they’d hatched a plan to start a business, and with that crucial milestone dispatched, Alex enrolled in the only traditional floristry training available in the UK. Promptly she realised that she loathed everything about it. “It was so tight and formal!” she says, groaning at the memory of its stiff and stifling cornucopia of rules. “It was flowers by numbers and it went against every reason I’d wanted to pursue it in the first place. It totally suffocated the idea of floristry as an artistic medium, so I left after this first level.”

Happily, the sisters remained committed – perhaps more so – despite the shaky start, resolving instead to look to the source for their education: Mother Nature herself, and more specifically, those gardens whose aesthetics they admired, where nature had been harnessed where strictly necessary, but otherwise permitted the crucial freedom so conspicuously lacking in her training. “We spent six months travelling the country, going to Sissinghurst and Great Dixter and Charleston, and taking notes of all these plants we wanted to grow, having no idea if we could. Those ran parallel just happened to run parallel with the realisation that we’d have to grow our own plants if we wanted to do this properly.” 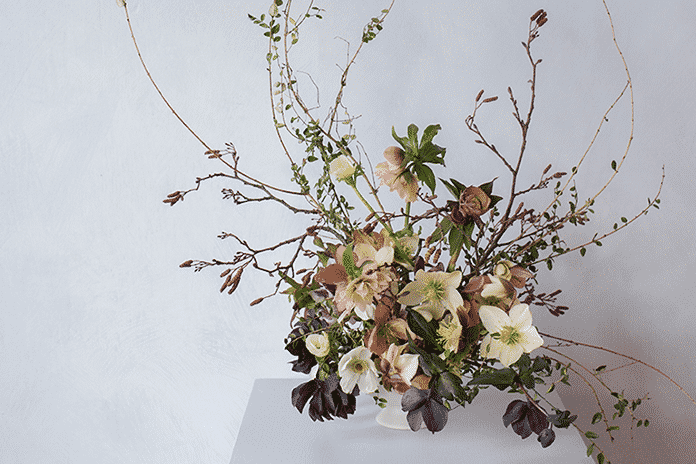 Aesme started out in Oxford, where the sisters began incrementally doing friends’ – and then friends’ of friends – weddings. All the while they were busy experimentally planting a patch of garden at Jess’s boyfriend’s family farm in Hampshire, where serendipitously an allotment sized patch of bramble had just come available. “That first year we got loads of sweetpeas, and we were astonished at the difference between using these and using imported flowers. It was a transformative realisation.”

Since then, the garden has expanded, along with the whole Aesme operation (so named as a twist on a character, Esme, in a French novel they both love). The speed with which the sisters have gathered momentum, considering that four years ago both were total neophytes, is astonishing, but is doubtless rooted in their reverence for nature – a respect that isn’t always at the heart of floristry. “We wanted to keep everything connected to the garden,” explains Alex, ruminatively. “We wanted it to be evocative and deeper than just buying pretty things from the flower market, which seemed somehow shallow. The idea is to connect floristry to horticulture, and to collect ingredients without hierarchy. We don’t place more importance on, say, a rose, than on a gorgeous weed or a vine or a root. It somehow also connects us back to our childhoods, on-off between the city and Wiltshire – our memories are all of the sound of bumble bees, of heat, and long summers full of sensory joys. Oh, and we read ALL of Constance Spry!” The result is astonishingly beautiful; modern yet dripping with romance, that oft-overused word ‘timeless’, and above all, exquisitely painterly.

Quite how radical such commitment to the seasonal and, where possible, the home-grown, is can only really be appreciated when you consider the normal modern parameters of flower selling. Some 90 per cent of consumer-bought bouquets, bunches and blooms hail from Holland’s industrial-sized flower auctions. Alex and Jess have been to see for themselves. “I don’t want to be too damning, because in some ways the Dutch industry is extraordinary – you have these monolithic airport sized markets of flowers catering to millions. The flowers are imported from across the globe to Holland, auctioned and then brought to Britain. But it has had an affect, insofar as it has killed off the British flower industry, and only now are we seeing a few small scale growers, though it’s hard because there’s not enough land.” 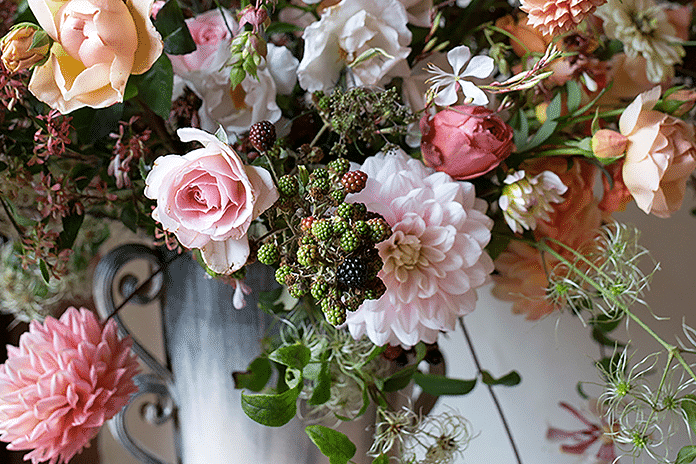 The quality too, inevitably suffers when flowers travel long distances. “You have to consider why we buy flowers,” says Alex thoughtfully. “At its heart, they are as tokens of nature, of what’s going on outside. But for your flowers from the supermarket to last ten days on your table, they have to be refrigerated and covered in chemicals. They’re toxic really.” She remains optimistic, nonetheless. Marks and Spencer and Waitrose are, she says, trying to buy more British flowers, while there are good farms in Lincolnshire that can supply in volume.

For her part, along with Jess, Alex has created a pocket in Shepherd’s Bush – via Hampshire – which changes with every nuanced shift in season and is so abundant with garden flowers trailing enticingly that it works a spell of enchantment on all who enter. Not, she says, that it isn’t serious work. “It’s not at all glamorous!” she laughs. “It’s really bloody hard work, bleaching buckets and working insane hours. It’s physical and messy and exhausting. But when we’re in the garden in the sunshine, amongst the wild crazy hedgerows, knowing we’re bring some of that back to the city, suddenly it’s all worth it.”