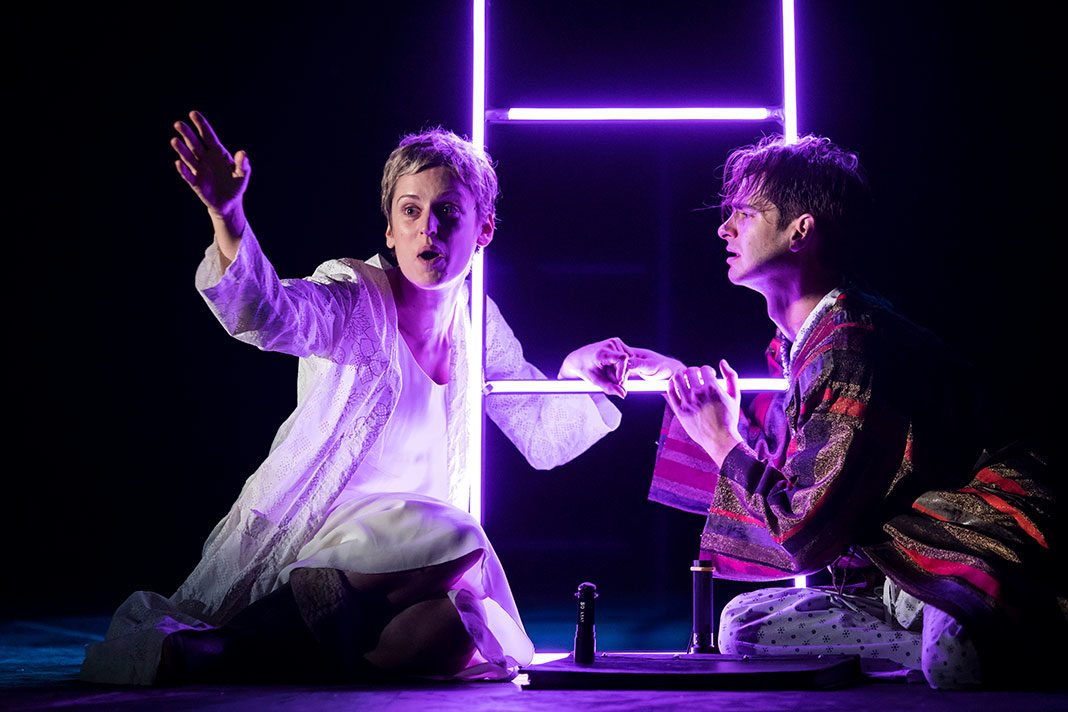 Tony Kushner’s epic two part play, ‘Angels in America’ made its London debut in 1993. Now, over twenty years later, this eight-hour extravaganza is back at the National Theatre in Marianne Elliott’s latest production. Subtitled ‘A Gay Fantasia on National Themes’ it explores, in a two-part play (Millennium Approaches and Perestroika), the effect the AIDS epidemic had in New York during the Reagan years.

The play takes place at a time when the public’s understanding of AIDS was murky. The epidemic was wiping out huge numbers and American politicians were refusing to publicly address it. The play is an excellent history lesson for anyone new to this era.  But at the heart are the innate complications and imperfections of the human character, the nuances with which life unfolds, as relevant to audiences today as they were when it was first written.

Three stories make up the backbone of the play. The central story follows Prior Walter (Andrew Garfield), a flamboyant homosexual who early on announces to his boyfriend Louis (James McArdle) that he has AIDS, ‘I can’t find away to spare you, baby’.  Neither does he spare the audience, taking them on a gritty, hallucinating journey that intensifies throughout the play.

Prior’s story interweaves with Mormon couple Harper and Joe Pitt (Denise Gough and Russell Tovey). One is battling with depression in a loveless marriage and the other fighting against his homosexuality. The third story examines Roy Cohn (Nathan Lane); his diagnosis and refusal to accept that he has AIDS. Instead he calls it liver cancer, exclaiming that he is a ‘Heterosexual man, who fucks around with guys’. (Alarmingly he is the vicious, unethical lawyer who represented and influenced Donald Trump in the later part of his career).

Interspersed throughout the two parts are ghosts and angels, bringing with them wit and drama in equal measures. When the Angel (Amanda Lawrence) crashes through the ceiling at the end of Millennium Approaches Prior, in his moment of terror, shrieks ‘very Steven Spielberg’.  It’s moments like this that allow the play to address bolder topics, such as the relationship between God and humanity, without losing the audience completely. As the audience digests, in the last lines of the play Prior tells the audience ‘the time has come…The Great Works Begin’ stirring something larger.

Elliott masterfully supports these narratives; ghosts skip on stage and blood gushes from every orifice. She gives The Angel an unconventional look, dishevelled hair and a tatty American flag hangs limp around her body.  In keeping with Elliott’s War Horse days, she casts shadow creatures to puppet the Angel’s large mechanical wings, adding to her awkward magnificence.  Ian McNeill’s slick set similarly does well to support the script; neon strip lights frame rooms, smoothly threading together each scene.

The cast performances are exceptional. Arguably his best performance yet Garfield dazzles as overly camp Prior, his delicate and exaggerated gestures looking second nature. Lane too is outstanding as the loud, domineering, power hungry Cohn.

There are certainly wooly areas, particularly in Perestroika where the dialogue drags on – Louis’s thoughts on racism for instance – but overall Angels is powerfully thought provoking and wonderfully wicked. The National has done well to revive this play now, where the human instinct for survival and compassion overcomes all.

Angels in America will be broadcast to cinemas across the UK and internationally via NT Live; Part One on 20 July and Part Two on 27 July ntlive.nationaltheatre.org.uk